INTERNAL VIEWING ONLY (FOR NOW)

Set up in 2014 as a non-profit foundation (stichting), in 2018 Broadcast Amsterdam pivoted from producing weekly public access television and YouTube content for Amsterdam to set up a local streaming radio station. Why? People were asking us for it, a combination of volunteers and audience, and it seemed like a more sustainable enterprise for us in the long term. I used some money from a personal tax rebate to fund the equipment etc that we needed to start off.

We’ve developed this concept in a fairly experimental manner, trying all sorts of different content, formats and several different locations in the city, and recruiting many different volunteers to participate in building the station. Overseeing this, I’ve learned a lot, and others will have too. Just recently we’ve had a year of on-off lockdowns that has interrupted much of the progress we would have achieved in a normal year. For example on the verge of the first lockdown we had three commercial clients signed up to sponsor content on the station. These will hopefully be taken up when the time is right. Happily the station has been able to adapt and maintain core functions, and more, under the current restrictions.

However, now is the time to use our experience to set a more firm path for where we want take the radio station in the next few years. With this in mind, in December 2020 we invited the whole volunteer team to brainstorm on this and what you think could be improved. Together with Geli Carney and Jessika Lynch, consulting, I have now set out what I believe is the best direction for us, a two-year roadmap for Broadcast Amsterdam (together with a fresh vision, mission and values statement), which I hope we can all be excited about.

We should have a much more developed set of roles across the organisation. From volunteer presenters, to supporting volunteers or paid producers/freelance services, we should know who is responsible for what, how many hours per week they are expected to contribute, and what we are looking for from future volunteers.

The organisation should have a clear vision, mission and values that guides us and, in combination with this road map, enables team members to actively sign up to where we are headed.

As Executive Producer I have been intensively required for the day-to-day production and communications for the station up until now, also on a volunteer basis, but this is not sustainable in a long term. By 2023 the organisation should not be reliant on me in these areas; the Executive Producer role should be focused on providing leadership and direction, marketing the station, developing income streams for Broadcast Amsterdam and other organisational goals. We are working towards a more self-sufficient volunteer base, automation where appropriate, and shared systems. We could also pay a freelance producer to cover some of the production workload. Here’s what our organisation in 2023 could look like: 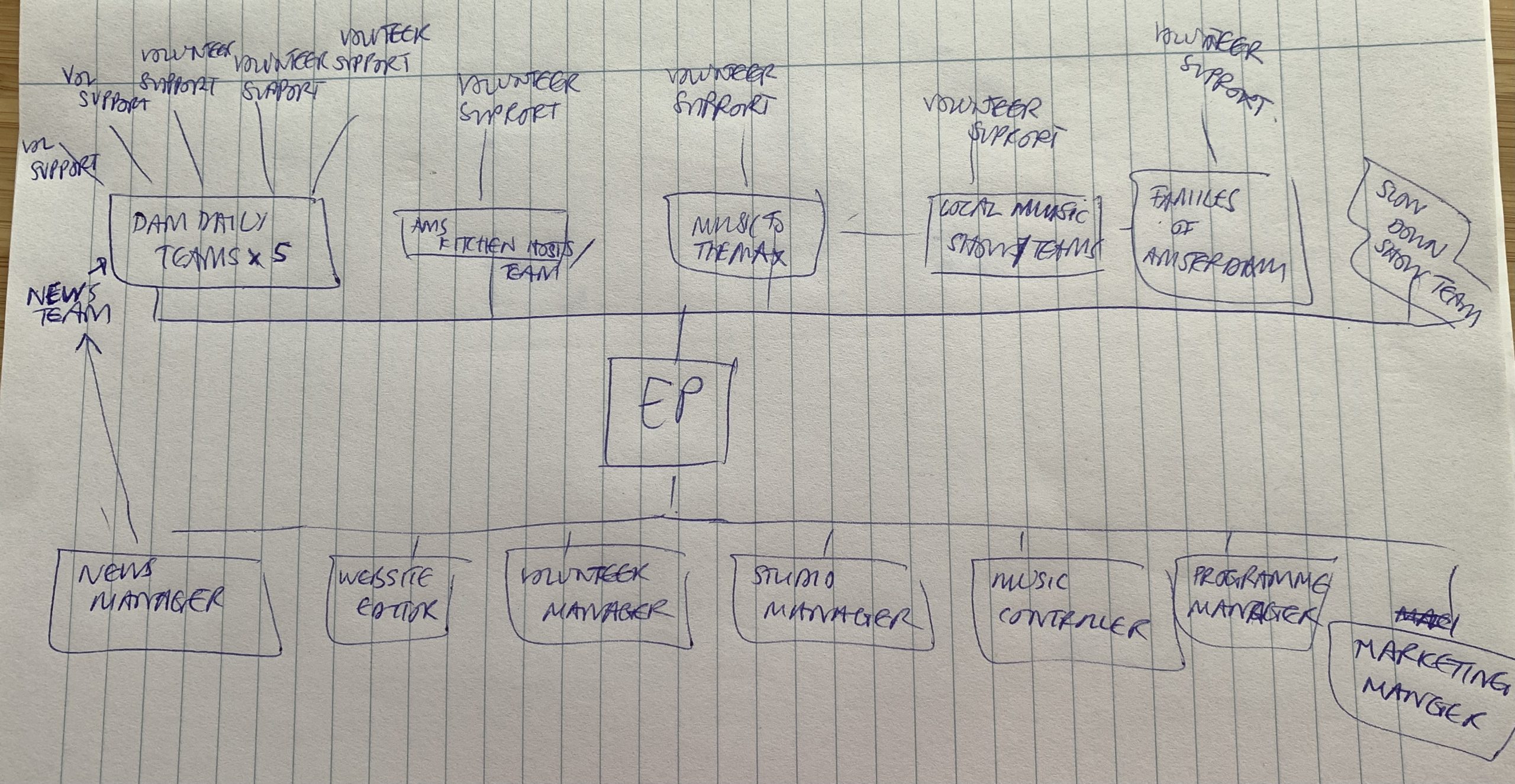 After trying out a few places already, we hope to have found our ideal location for a shared studio base and point of contact for the radio station. What we are looking for:

Alternatively, or in combination;

On the way it’s possible there may be hurdles to where we want to go. I’ll be looking out for these and if a change in direction is needed or just a delay in where we want to go, I’ll keep the team updated. Some identified risks include:

Other cities | I believe we are developing a model of local radio that we could roll out to other cities/locations. By 2023 I expect to have tested out a pilot of this in the Netherlands, in collaboration with existing networks, eg Haarlem, Almere, The Hague, Eindhoven, Delft, Groningen, Hilversum, Leiden.

Partnerships & support | I believe the work we are doing is of great value to the local community and deserves both recognition and financial support form local government and grant-making bodies that share our objectives. I hope that we would have some success in this area by 2023.